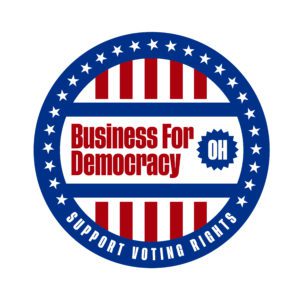 (Cincinnati, OH)—A new Ohio Business for Democracy collaborative launched today to raise the trusted voice of small business on the need to protect our democracy. The collaborative will elevate the issue to be one of concern to voters in November and call for Congressional action to stop the nation from falling into autocracy.

“A strong democracy is essential for a vibrant entrepreneurial economy,” said Cynthia Pinchback-Hines of Co-Op Cincy, one of the OH Business for Democracy collaborative leaders. “Small business owners know what happens under autocracy and one-party rule. Small businesses no longer are valued other than for the taking by deep-pocketed corporations. Entrepreneurship and economies die.”

“When autocratic rulers have a lock on power, the voices of small business owners are not heard, and the ownership of a successful business and the welfare of its employees are always in jeopardy,” said Mayda Sanchez of the Ohio Sustainable Business Council and another collaborative leader.

“We will make our voices heard and we hope to make protecting democracy a votable issue this fall,” said Daniella Kodjo of MightWe. “Our democracy and economy are at stake.”

“Co-op Cincy’s mission of “creating an economy that works for all” can be realized only if democracy is protected,” said Pinchback-Hines.