It can be said that the opposite of democracy is autocracy.

Autocracy is a form of government in which absolute control lies in the hands of a single person, or of a tightly held group of people (ex. one party rule).

Autocracies often develop piece by piece over the course of time.  Autocracies are created from elections that are not free and fair, coercion, repression, intimidation, and control of the media. 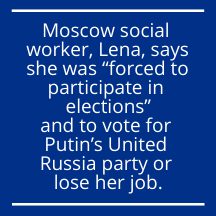 All these tactics instill fear of showing political opposition or dissenting public opinion.

A real democracy holds fair and free elections, where voters are not coerced or intimidated, and the media is not controlled by the government.

A real democracy is also vital to a vibrant entrepreneurial economy in which people know that if they have a good idea and are willing to make sacrifices and work diligently, their ideas can be turned into successful, profitable businesses for themselves, their families, and their communities.

Entrepreneurship and a nation’s entire economy suffer when electoral power is removed from the people allowing for an autocratic government and the politically well-connected to control the business ventures of others. 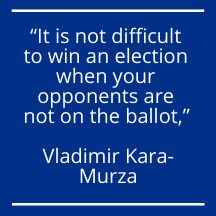 From 2000 to 2010, the state targeted a shocking one-third of Russian businesses for raids. Many thousands of business owners went into exile, avoiding the fates of over 70,000 other who were jailed between 2002 and 2012 on technicalities or made-up charges of tax evasion and other crimes. By 2018, one in six Russian business owners faced prosecution… (Strongmen: From Mussolini to the Present)

Ben-Ghiat cites the late Russia scholar Karen Dawisha to explain the intent of Putin’s war on entrepreneurial-capitalism—it was to “put away the competition.”  Private business owners continue to be arrested to this day in Russia.