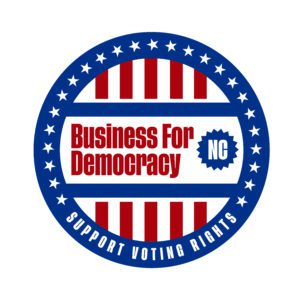 (Raleigh, NC)—A new North Carolina Business for Democracy collaborative launched today to raise the trusted voice of small business on the need to protect our democracy. The collaborative will elevate the issue to be one of concern to voters in November and call for Congressional action to stop the nation from falling into autocracy.

“A strong democracy is essential for a vibrant entrepreneurial economy,” said John Martin of Martin Sloane International, one of the NC Business for Democracy collaborative leaders. “Small business owners know what happens under autocracy and one-party rule.  We will not be taken in by fake political claims and bad policies.  To do otherwise is a death toll for both our rebounding economy and our democracy.”

“When autocratic rulers have a lock on power, the voices of small business owners are not heard, and the ownership of a successful business and the welfare of its employees are always in jeopardy,” said Tracy Furman of Triad Local First, another collaborative leader.

“We will make our voices heard and we hope to make protecting democracy a votable issue this fall,” said Gerry McCants of Greensboro Business League. “Our democracy—including the economy, fairness and equality of rights for many African Americans—is at stake.”

“As a small business owner, I see daily the importance of being involved and active when it comes to laws and regulations affecting entrepreneurs,” said Martin. “Business For Democracy is advocating on behalf of the equity and democracy issues that I support. I strongly endorse their effort and mission.”

“Strong democracy and strong local economy go hand in hand,” said Furman. “They are the checks and balances for a thriving community.”