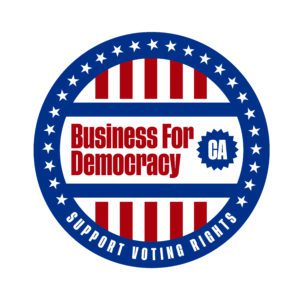 (Sacramento, CA)—A new California Business for Democracy collaborative launched today to raise the trusted voice of small business on the need to protect our democracy. The collaborative will elevate the issue to be one of concern to voters in November and call for Congressional action to stop the nation from falling into autocracy.

“A strong democracy is essential for a vibrant entrepreneurial economy,” said Heidi Pickman of CAMEO, one of the CA Business for Democracy collaborative leaders. “Small business owners need certainty.  We always work toward a level-playing field for small businesses when it comes to policy, which necessitates democracy with a capital D.”

Small business owners know what happens under autocracy and one-party rule. Small businesses no longer are valued other than for the taking by deep-pocketed corporations. Entrepreneurship and economies die.

When autocratic rulers have a lock on power, the voices of small business owners are not heard, and the ownership of a successful business and the welfare of its employees are always in jeopardy.

“We will make our voices heard and we hope to make protecting democracy a votable issue this fall,” said Alan Thiesen of Sherlock Geopolitical Forecasting. “Our democracy and economy are at stake.”

“As a mom and a business leader, I’m deeply worried about the direction of our country,” said Michelle Hirons of HigherRing, another collaborative leader.  “We should be investing in our people through education and job training to improve their lives. We should be aiming for the fair inclusion of all people because diversity makes us more powerful. We should be caring for our planet and reining in the damage we cause to natural systems.  Most Americans believe this but recent attacks on our democracy threaten our potential. A free and functioning democracy is worth protecting and our company will be fighting to pressure the elected officials in our 26 states to support the will of the American people.”

“I believe that we have the best, small-d democratic system in the world – when it truly represents the will of the people, “said Vincent Casalaina of Image Integration. “I’m fighting to make that a reality, not just in California but across the United States. A truly democratic system works for everyone and makes business grow and prosper.”

“In my work I have seen how democracy can fail in countries such as Hungary and Turkey,” said Thiesen.  “In my professional opinion, America today faces a crisis of democracy. Politicians are undermining our democracy through voter suppression laws and false claims of election fraud, and by packing the courts with political loyalists, which undermines the Constitutional separation of powers. When we undermine democracy, we also undermine prosperity.”

“Protecting democracy ensures that the needs of under-resourced entrepreneurs are considered, and they have a voice,” said Pickman. “These entrepreneurs need leaders who are going to make policy that puts small businesses on equal footing with big corporations.”