Why democracy is suddenly in need of defense

Why democracy is suddenly in need of defense

President Biden began his comments at the virtual Summit for Democracy he convened this week with two admissions: First, that the subject of defending democracy had “been on my mind for a long time,” indicating that it’s a concern that has lingered. And, second, that the United States has not perfected the implementation of liberal democracy.

“I wanted to host this summit because here is the — here in the United States, we know as well as anyone that renewing our democracy and strengthening our democratic institutions requires constant effort,” Biden said. It was an echo of the inaugural address he gave on Jan. 20, two weeks after supporters of his opponent in last year’s presidential election overran the Capitol where he was speaking. He said then that democracy was both “precious” and “fragile.”

“American democracy,” he said on Thursday, “is an ongoing struggle to live up to our highest ideals and to heal our divisions.”

He was speaking to an audience composed of leaders from scores of other countries, many of which are struggling to improve their own democracies and some of which have seen their own democratic experiments erode.

Much like America’s own. The V-Dem Institute at the University of Gothenburg in Sweden compiles a measure of democracy in countries and within political parties, based on a broad examination of policy positions and behavior. From the end of World War II until the late 1970s, the United States’ ranking on the institute’s Liberal Democracy Index (LDI) climbed steadily. In the past decade, though, it’s declined sharply. 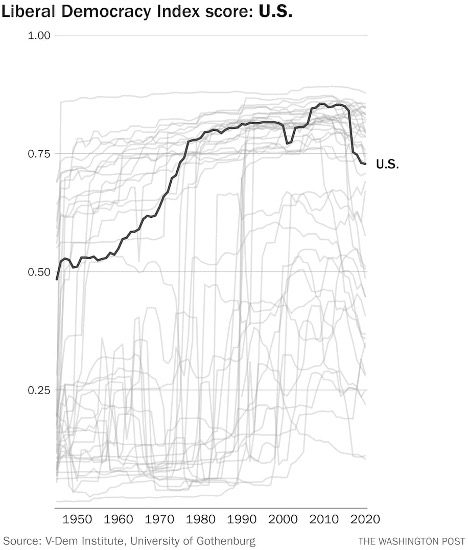 That graph shows the individual tracks for a number of other countries, most of which were invited to Biden’s summit. It’s important to note that the U.S. score is still high, far higher than one of the targets of the summit: Russia. In the early 1990s, the collapse of the Soviet Union spurred a spike in Russia’s LDI score, but that began to quickly slide back down. 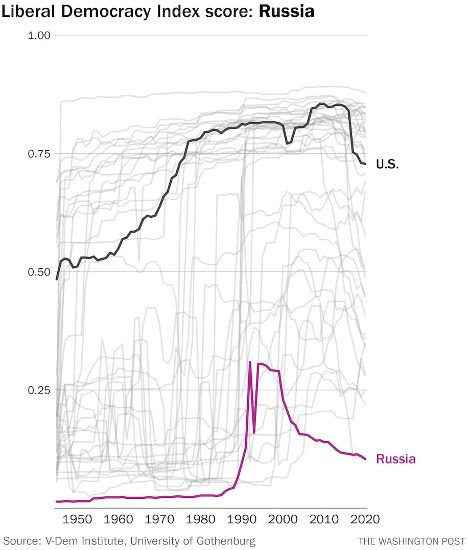 For Biden and the United States more broadly, there are two questions about the state of democracy internationally. The first is whether young countries, like Ukraine, will continue on an upward trend in their embrace and implementation of democracy. Ukraine’s LDI score is a reflection of the transitions in power the country has experienced. 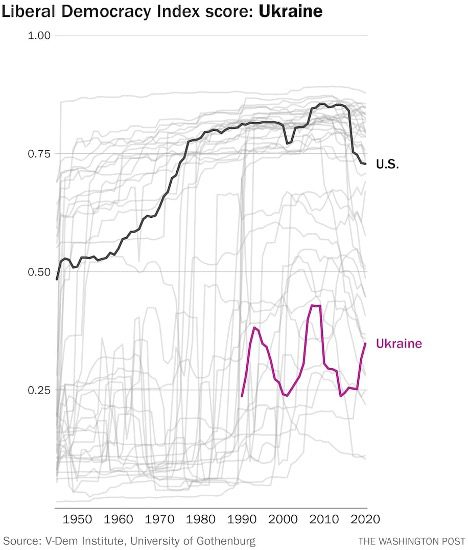 The other question is whether countries that have slid further than the United States will halt or reverse that trend. Poland, for example, has seen a significant erosion in democracy as measured by the V-Dem Institute. 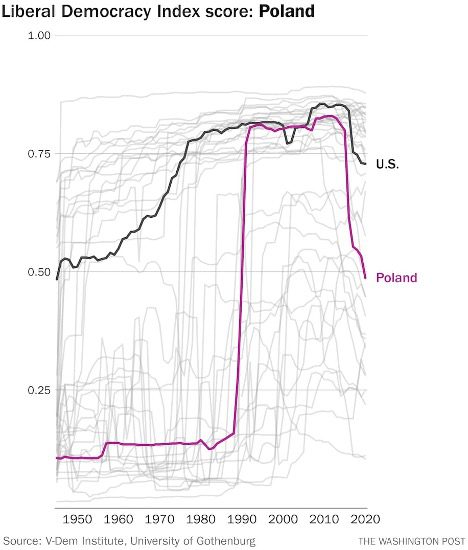 As has India, which was also invited to participate. Its measured LDI score was never as high as the United States’, but the figure has dropped under current prime minister Narenda Modi. 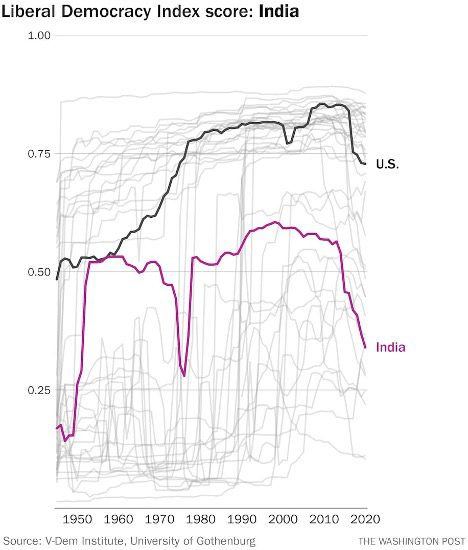 The concern is that those trends will continue. Hungary, which is not participating in the summit, is one of the flagship representations of democratic backsliding internationally. 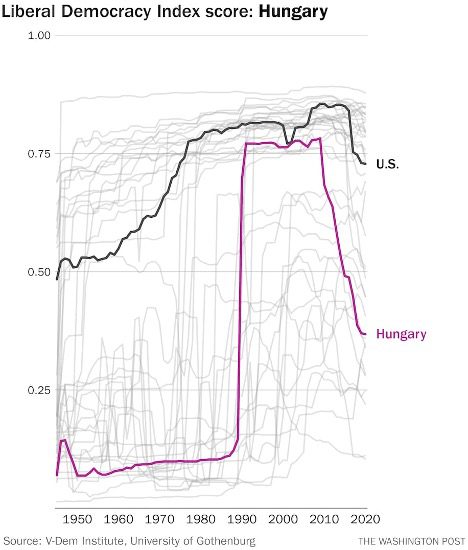 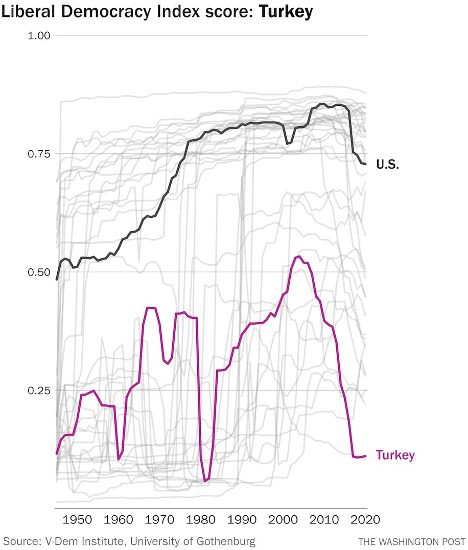 You’ll notice that the recent pattern in many of these countries (including participating country Brazil, below) is that the contraction of liberal democracy has occurred mostly in the last several years. Often, as with Brazil, that correlates with a change in leadership. In 2016, the democratically elected president, Dilma Rousseff, was impeached and removed from office. 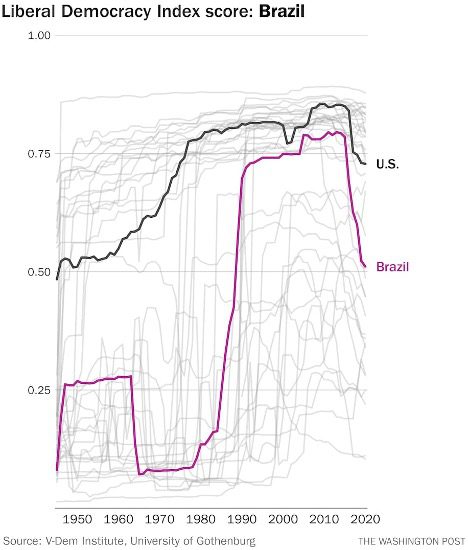 Not every country has followed a similar pattern. One standout on the LDI metric is Denmark, which has continued at a high level of liberal democracy. 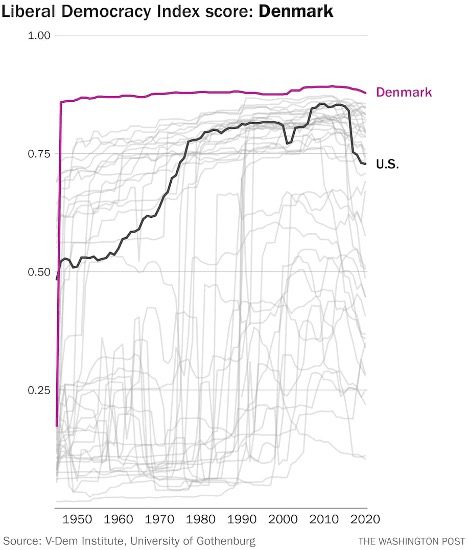 So, too, have Great Britain and France. 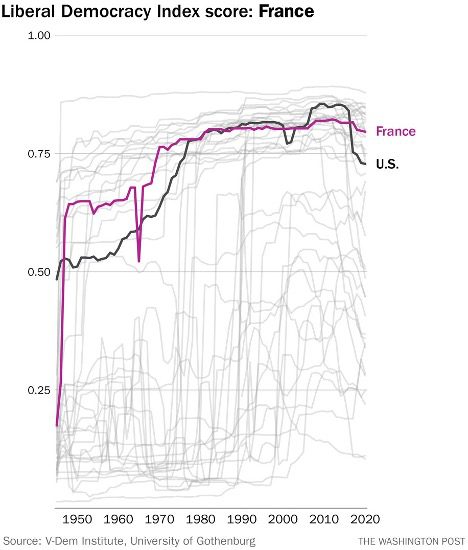 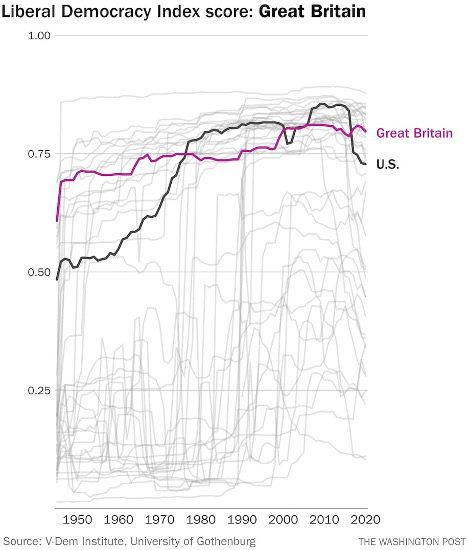 The United States was joined at the summit by Canada and Mexico, which have followed different tracks on the V-Dem metric. It’s useful, though, to compare the position of the United States with that of Canada; the two are currently viewed about equivalently. 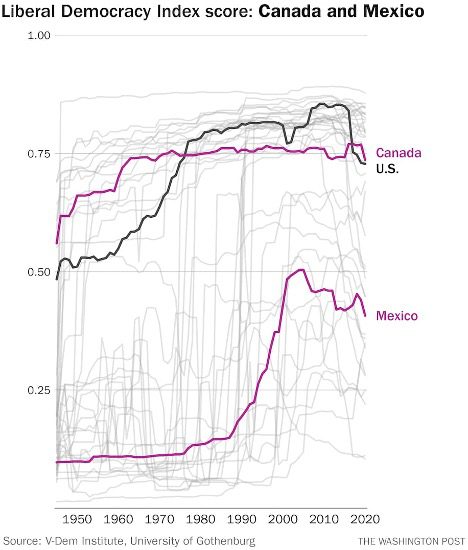 Again, there are an enormous number of factors that go into the LDI score. (You can learn more about them at the V-Dem website.) In the United States, though, there’s clearly one significant factor in the shift. Here, we have two main political parties. And over the past decade, one of those parties has seen a sharp increase in its illiberalism, its departure from liberal norms and policies. That party is the one on whose behalf those rioters appeared at the Capitol on Jan. 6. 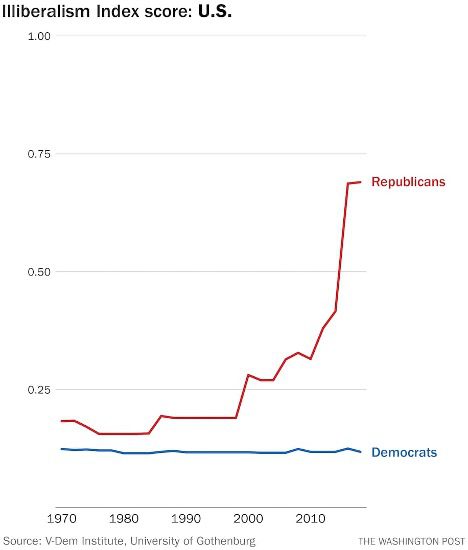 “Will we allow the backward slide of rights and democracy to continue unchecked?” Biden asked near the end of his remarks on Thursday. “Or will we together — together — have a vision and the vision — not just a vision, the vision — and courage to once more lead the march of human progress and human freedom forward?”

He was speaking to foreign leaders. His audience also clearly included domestic ones.