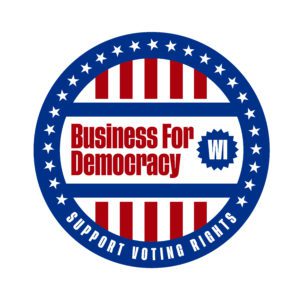 (Madison, WI)— A Wisconsin Business for Democracy collaborative launched today to raise the trusted voice of small business on the need to protect our democracy, which is vital to having a vibrant entrepreneurial economy.

“A fair and free democracy is the cornerstone of a thriving economy,” says Camille Carter, CEO of the Madison Black Chamber of Commerce.

“Entrepreneurship thrives in a free and democratic society, and we will give everything we have to ensure that democracy lives on for all future generations,” says Nick Myers, CEO of RedFox AI

The collaborative will make the business case for protecting democracy and make it an issue of concern to voters in November.  It will also call for Congressional action to stop the nation from falling into autocracy.

Six other states have established Business for Democracy collaboratives (AZ, CA, MI, OH, PA, NC) and have called on their U.S. Senators to support the bi-partisan Electoral Count Reform Act of 2022.  The Wisconsin collaborative is sending a letter to its two Senators asking for the same.

In addition to reforming the Electoral Count Act, which addresses the role of Congress in the Presidential election, the Wisconsin businesses also believe that Congress should pass the John Lewis Voting Rights Advancement Act and the Freedom to Vote Act. The collaborative will inform the public on where Congressional candidates stand on these bills.

Daniel Guerra Jr., CEO of the Madison-based Altus and one of the leaders of the collaborative, says that in addition to the needed Congressional actions, the collaborative will support all efforts to promote voting.

“One thing we can do as leaders in companies and organizations is to remind our team to take a break and engage in the democracy around them. Participating in democracy is just as important, if not more, than our day-to-day job responsibilities,” says Guerra. “We encourage our fellow Americans to fully participate in democracy and be self-governed, a right so many have died to protect.”

Mathias Lemos Castillo, Board Secretary of the Latino Professional Association in Madison, agrees saying, “Democracy involves all of us.”

“Each of us has a role to play to encourage voter participation and civic engagement to ensure free and fair elections. To ensure a healthy economy and a more sustainable environment, we need to strengthen, not weaken, voting rights and democracy across Wisconsin and the nation,” says John Imes, a retired small business owner and the Co-founder of the Wisconsin Environmental Initiative.

“Small business owners know what happens under autocracy and one-party rule,” said Frank Knapp Jr., Director of the Business for Democracy national campaign of the American Sustainable Business Network. “Entrepreneurship dies. Autocratic government officials only care about power and greed.  Policies supported by the deep-pocketed supporters of autocrats are enacted and small businesses no longer have a voice in government policy or the opportunity to benefit from their success.”

“Protecting democracy and our economy is on the ballot this November. We will make our voices heard,” says Knapp.

To learn more about Business for Democracy, visit www.businessfordemocracy.us.