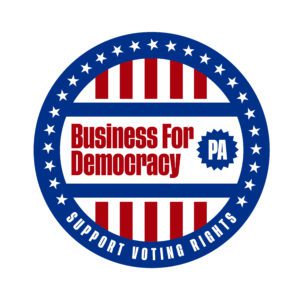 (Harrisburg, PA)—A new Pennsylvania Business for Democracy collaborative launched today to raise the trusted voice of small business on the need to protect our democracy. The collaborative will elevate the issue to be one of concern to voters in November and call for Congressional action to stop the nation from falling into autocracy.

“A strong democracy is essential for a vibrant entrepreneurial economy,” said Jenn Richey Nicholas of Pixel Parlor, one of the PA Business for Democracy collaborative leaders. “Small business owners know what happens under autocracy and one-party rule. Small businesses no longer are valued other than for the taking by deep-pocketed corporations. Entrepreneurship and economies die.”

When autocratic rulers have a lock on power, the voices of small business owners are not heard, and the ownership of a successful business and the welfare of its employees are always in jeopardy.

The PA Business for Democracy collaborative is calling on Congressional candidates to support reforming the Electoral Count Act and the passage of the John Lewis Voting Rights Advancement Act and the Freedom to Vote Act. A bi-partisan group of Senators is drafting a bill to reform the Electoral Account Act. The other two Acts failed in the U.S. Senate this year.

“We will make our voices heard and we hope to make protecting democracy a votable issue this fall,” said Sherree Goldstein of the Square Cafe. “Our democracy and economy are at stake.”

“As a company committed to empowering individuals, families, and communities to take control of their lives, genuine participatory democracy is at the core of our work,” said Christopher Jacobs of Community Impact.

“Democracy is essential for the future of my mission-based business that seeks to bring equity and equality to my community, country, and world,” said Nicholas.  “We are already strained to work within the complicated framework of a divided country that is slanted to work against us, but at least we have skin in the game. Without democracy, we won’t have a chance for business as we know it to survive.”